Whether he’s designing dwellings for a scenic oceanside town in Costa Rica or partnering with developers to revamp an economically depressed neighborhood in Panama City, architect Ricardo Arosemena ’98, ’05 M.Arch. helps create vibrant communities that enrich the lives of people who live in them.

Arosemena, a Panama native, started an architectural firm with his wife, Marie Andreé Soundy ’98, ’05 M.Arch., more than a decade ago, before she began to pursue an art career. He continues to work on developments that are ecologically sustainable and accessible to people from various income levels.

“I started searching for those opportunities—working with communities and trying to create real, sustainable, and healthy neighborhoods,” he says. “I’ve been lucky to do a large range of work.”

Some of that work is in the historic Panama City neighborhood of Santa Ana, which has been plagued by poverty and gang violence that have pushed residents away. A nearby neighborhood, Casco Viejo, had suffered a similar fate before UNESCO declared it a world heritage site in the late 1990s, paving the way for investment and redevelopment.

“We’re trying to bring people back,” Arosemena says. “Santa Ana is a place that has been losing thousands and thousands of residents for many, many years. You have entire city blocks where buildings have been burned down, and they’re empty. So we are working with very visionary developers, trying to develop areas that are now empty and not being used, and doing it in a way where hopefully instead of pushing people out, we will bring people in, including both minimum wage workers and middle class people.”

A sustainable redevelopment, Arosemena says, means taking advantage of parks, plazas, and walkable streets, and bringing in businesses that can serve residents from all walks of life.

“We want to bring back that richness of urban life, and we want to do that in the most sensible way without displacing people,” he says. “That’s definitely where a lot of our passion is. We live next to the people we’re working for and working with.”

For more than a decade, Arosemena has also worked on Las Catalinas, a small town in Costa Rica. The idea there has been to create an ecologically sustainable community that allows people to enjoy the beauty of the coast. Las Catalinas is highly walkable, and cars are off limits in much of the town, which is a work in progress.

“The idea is to have a lifestyle that is very healthy and very much in touch with the ocean and with nature,” he says, “combining the best of healthy living and quality of life with sustainable practices.”

Arosemena has been involved since the project’s 2007 kickoff, which brought together investors, business owners, and potential residents as well as designers, architects, and experts in infrastructure and landscaping. The project has allowed him to work with Douglas Duany, an associate professor of architecture at Notre Dame, who has helped lead the planning efforts.

Arosemena is working with developers to build homes in phases, and the plan is to keep the town small and avoid sprawl. Within the next two or three decades, he says, Las Catalinas should have between 1,200 and 1,300 homes. And while early development has necessarily focused on higher-income residents, he says, over time, as it becomes financially feasible, planners hope to attract people from a range of incomes.

Arosemena sees his work as an opportunity to collaborate with progressive-minded people who are looking to improve their communities.

“Architecture for me has gone from being more something I do at my desk to something I do outside, on the street, with people,” he says. “It’s about making places, not making buildings. As time goes by, I realize that what I thought would be a life of sitting at a drafting desk and designing objects has really become more a life of sharing and exchanging and negotiating and finding consensus and all these things that you do to create complex things.”

He feels fortunate to have an outlet where he can make a difference, drawing on the classical architectural training he received at Notre Dame, which emphasizes the tradition of building livable, people-friendly communities that respect local people, climates, and cultures.

“I hope that in the end we will be able to contribute to the continuation of cities,” he says. “It’s one thing that the Notre Dame School of Architecture highly stressed—that we are one part of a chain, we are not just spots in time, but we are part of something much, much larger. That is something that’s very humbling in a good way, and it’s also inspiring.

“One of the things that you take out of your Notre Dame education is the idea that we have a responsibility to serve. I’m very fortunate to be able to integrate that with how I make a living, and for that I’m grateful.”

In a commitment to public service, DeJorie Monroe ’16 is pursuing a career in diplomacy and international affairs as Notre Dame's first Charles B. Rangel Graduate Fellow.

Each year, the Notre Dame Alumni Association distributes free postcards for students, faculty, and staff to write and send messages to the mother figures in their lives. This year, we asked five students to write and narrate their cards on camera. 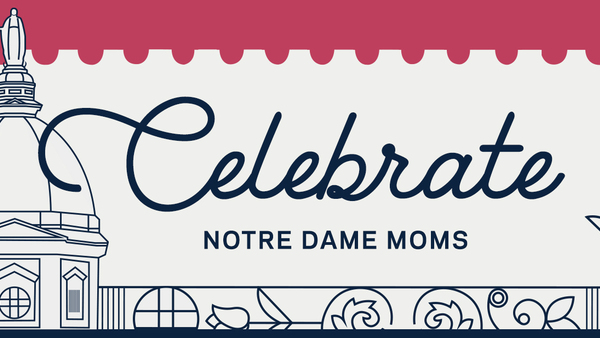 This Mother’s Day, the Notre Dame Alumni Association has compiled past We Are ND stories from mothers and mother figures in the Notre Dame community.